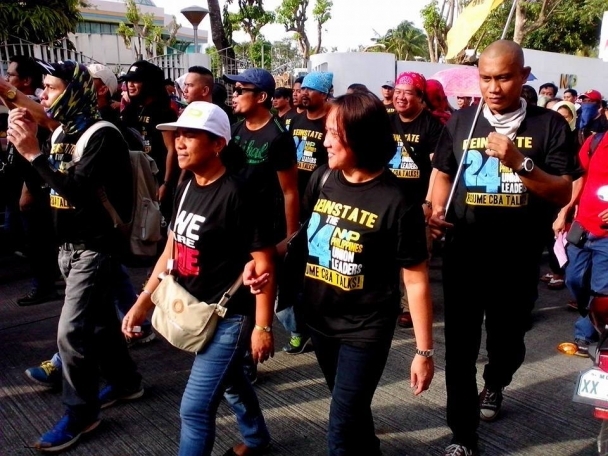 Science Park 1 and a march to the company’s plant.

and the regularization of contractuals.

The NXPSCI management cited “illegal strikes” for the dismissal of the 24 union leaders, conveniently

according to the Philippine government. 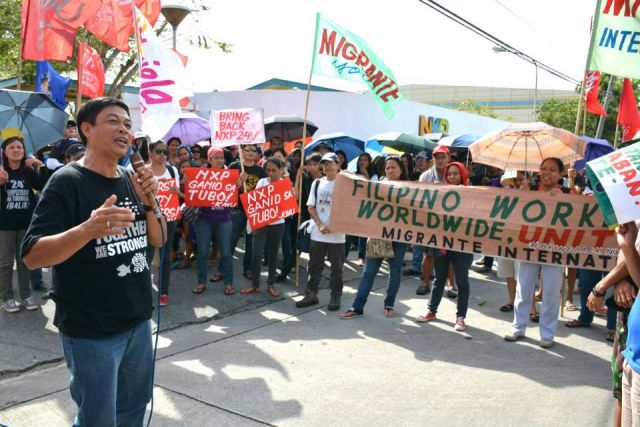 The NXPSCI workers’ struggle have been embraced as a struggle of the Filipino workers and people.

NXP is one of the biggest electronics companies in the world and electronics is the No. 1 export of the

Philippines. The NXPSCI Workers Union is one of the very few unions in the country’s special

Three months after the illegal dismissal, the collective actions of the NXPSCI workers and their

supporters, both throughout the country and the world, have forced the NXPSCI management to

At the same time, the NXPSCI management still refuses to give in, or at least move closer, to

NXP is declaring martial law on its workers.

Following the series of actions, and most especially the latest successful actions on 6 August,
cameras were installed all over the NXP plant. Company security guards, on obvious instructions
from the management,prevented the workers from wearing t-shirts with the print
“REINSTATE THE 24 OFFICERS” inside the plant. The union also received reports that workers
are being prevented to like, post, share and tweet messages regarding the NXP labor dispute on
social media.

The management continues to ignore the demand for the reinstatement of the 24 illegally-dismissed
officers. Instead, it is offering a compensation package.

But the 24 illegally-dismissed union officers are not biting the offer. “We want to go back to work”
remains to be their firm stand. The union is strongly backed by its more than 1,500 members.

A new online petition was launched at SumofUs.org
(http://action.sumofus.org/a/apple-supplier-nxp-union-busting/),arranged by IndustriALL Global Union
on behalf of MWAP an IndustriALL affiliate.

The petition raises concern on the labor dispute in NXP Philippines and urges Apple to demand to
NXP the reinstatement of illegally-dismissed 24 union officials. NXP is one of Apple’s key suppliers.
The online petition had over 140,000 signatures in less than 2 weeks. Distraught by the furor it is
creating, NXP released a letter disputing the illegal dismissal and said that the petition is “based on
incorrect and misleading information.” The letter was signed by Sean Hunkler, EVP Operations
and Robert Rigby-Hall, EVP Chief Human Resources Officer.

The strong local and international support is definitely sending shivers to NXP. But at the same time,

it is trying to counter the strong support by launching more attacks against the workers.

Until the management complies with the just demands of the workers, the union will continue to launch protest